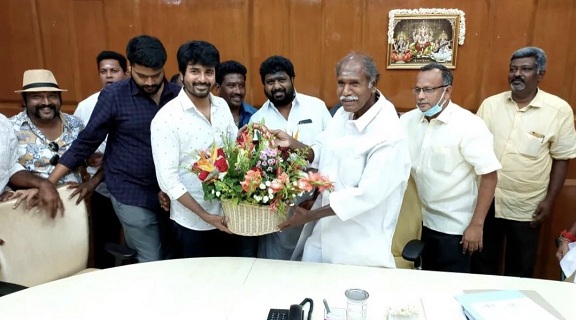 It was recently announced that Ukrainian actor Maria Ryaboshapka has been roped in as the female lead for Sivakarthikeyan’s movie with Anudeep KV.
Shooting for the movie was taking place in and around Karaikal. Now the team has shifted base to Puducherry.
The team had met Puducherry Chief Minister N Rangasamy and the picture from their meeting has gone viral.
Sathyaraj will be playing an important role in this movie which has music by Thaman.
The movie tentatively titled ‘SK20’ will be bankrolled by Narayan Das Narang, Puskur Ram Mohan Rao and Suresh Babu producing it under the banners of Sree Venkateswara Cinemas LLP, Suresh Productions and Shanthi Talkies.
***
'SK20' team photo with CM goes viralAnudeep KV.Narayan Das NarangPuducherry Chief Minister N RangasamyPuskur Ram Mohan RaoShanthi Talkies.SivakarthikeyanSree Venkateswara Cinemas LLP
76
Share

#DivyaBharathi looks stunning in these pictures shot during her Maldives vacation.

Vaishnav Tej announces his next project

Prev Next 1 of 765
WP2Social Auto Publish Powered By : XYZScripts.com