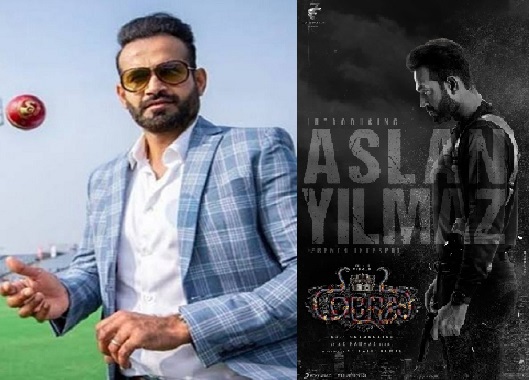 One of the best kept secrets of Vikram-starrer ‘Cobra’ is out. On Tuesday (October 27), which was the birthday of Irfan Pathan who is playing a key role in the movie, director Ajay Gnanamuthu revealed the first look and character name of the cricketer in the movie.

Irfan looks intense in the poster which said the name of the character he is playing in ‘Cobra’ is Aslan Yilmaz.

Wishing him a happy birthday, Ajay Gnanamuthu posted, “Wish you many more happy returns of the day dear ⁦⁦@IrfanPathan⁩ sir Super happy to have met and worked with such a warm and a caring person like you.. Wishing you only the besttt in the year ahead
#Cobra⁦⁩ ⁦#HBDIrfanpathan ⁦#AslanYilmaz.”

Music is by Oscar-Grammy winner A R Rahman, cinematography by Harish Kannan and editing by Bhuvan Srinivasan. The movie is said to be a super natural thriller.

Prev Next 1 of 216
WP2Social Auto Publish Powered By : XYZScripts.com